I’ve posted about open X11 servers before, including keylogging and grabbing an image of the desktop.  Today I just want to add a couple other tools to the toolbelt.  To learn more about X11, see the other posts as they describe it in better detail.

Today I’ll be using Ubuntu 14.04.1 LTS version.  The setup is almost the same as before with Ubuntu 12.04, except the config file has moved for some reason.  If you look in the /etc/lightdm/ folder, there no longer exists any lightdm.conf file.  There is only a users.conf file.  I tried just creating a lightdm.conf file, but that totally crashed my system and I had to refresh to my previous snapshot.  Do not do this.

The config files have moved to the /usr/share/lightdm/lightdm.conf.d/ folder.  Add the xserver-allow-tcp=true line to the end of the /usr/share/lightdm/lightdm.conf.d/50-ubuntu.conf file, restart lightdm with “sudo restart lightdm”, and you should be good to go.  Don’t forget to run “xhost +” to allow anyone to connect, just light the previous X11 post describes.

If you want to run xhost  + by default, add the following:

If you want to make it work on a different OS, here is a post that shows how to enable X11 on a couple versions of Linux.

First we’ll use the xspy tool.  This is actually already built into Kali, and seems to work better than the xkey tool that was described before.  Simply type xkey and then the IP address: 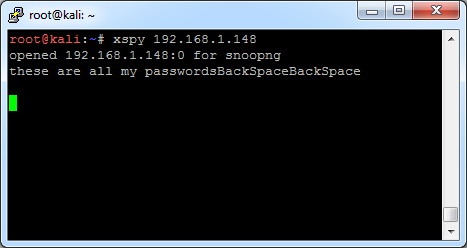 There appears to have been a different version in Backtrack or Kali at a different time where you had to specify options such as “xspy -display 192.168.1.5:0”, but on my machine, all that just confused xspy.  If your X11 server is on a port other than 6000 (like 6001 or something), you may have to download and compile a different version.  Just do a search – they’re everywhere.

The other tool is xwatchwin.  You’ll have to download this one.  I found it here.  Follow the README to compile (just type xmkmf && make) and you’re good to go.

In order to use the tool, first you need to find the ID of the window using xwininfo: 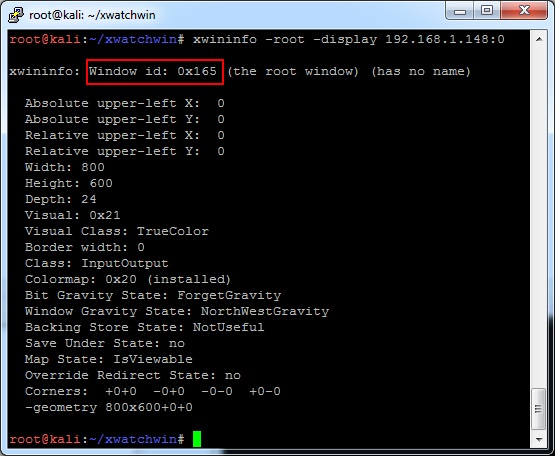 On my system, the window ID is 0x165.  So next (on the native Kali desktop, not a SSH terminal window), type:

A xwatchwin window will pop up, showing a (very delayed) constant view of the desktop.  This will pretty much be like a View Only version of VNC.

That’s all for now, happy hacking!

To understand X11 and some other ways to attack it, see the first X11 post.

There are a few additional things you can do with open X11 ports, but they don’t seem to work on a Ubuntu system.  Therefore I am setting up a CentOS 6.4 machine for this next test.

Run the default install of CentOS.  I used the LiveCD and ran the installer from there.

Once CentOS is installed, make sure you either disable the firewall or add in the appropriate ports.  Otherwise you’ll spend a long time troubleshooting why those ports don’t appear to be open over the network.  You can do this either from the GUI (System -> Administrator -> Firewall), or the GUI (/etc/init.d/iptables stop)

Allowing direct TCP connection to X11 is done by editing the /etc/gdm/gdm.schemas file.  There is an option called security/DisallowTCP that needs to be changed from true to false. 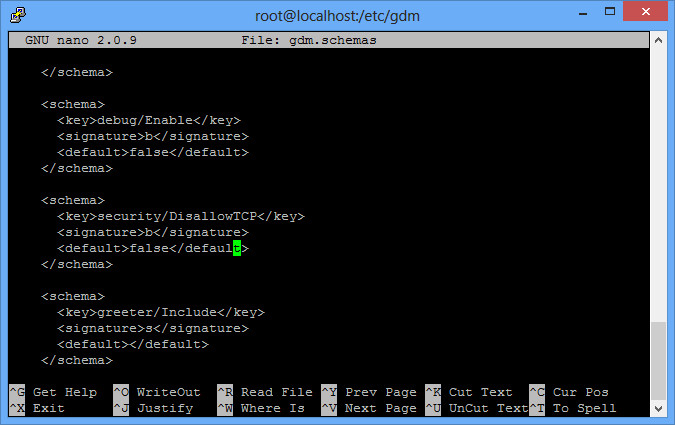 After this, restart your X server (or the entire system) and you should have port 6000 open.  If not, check the firewall again (iptables -L should either be empty, or have a rule for dst port 6000 BEFORE any deny all rule).

Also, remember to follow the same procedure as listed in the last X11 post.  xhost + must be added so that anyone can connect.

The first thing we are going to do is setup a keylogger over X11.  Download the xkey.c file from here.  Then compile it just as it mentions in the instructions:

There will be some warnings as shown above, but no errors – the program compiles just fine.  Then you just simply need to run the program in the form ./xkey <ip address>:<x11 number>.  So run the following:

Then start typing on your CentOS box.  The key presses will pop up.

Note: I really don’t know why everything is doubled up, but the point is, keystrokes are being logged.

By the way, I’ve also been playing with some older tools that are supposed to be able to push commands over X11 (like what we were doing with xdotool). They are called xpusher.c and xtester.c.  I haven’t gotten them to work yet though – if anyone else has, please comment.

X11 forwarding is when you use SSH to forward X windows to your local machine.  In other words, you SSH into a remote Linux machine running Gnome, type in a command for a GUI screen to pop up (gedit /etc/passwd), and your local screen will pop up the gedit window from the other side.

I installed Ubuntu 12.04.1 LTS, ran the updates, and added in the SSH server (sudo apt-get install ssh).  Run nmap to check the footprint:

Just SSH is up.  There are many tutorials out there on setting up X11 Forwarding, so I’ll be very brief.  You can test that it works in a Windows, Mac, or Linux client.  For a Windows client, download Xming from Sourceforge (an X11 GUI), and then check the box in PuTTY under Connection -> SSH -> X11 that says Enable X11 Forwarding.  Then connect and authenticate as usual.  Once you are authenticated, type gedit.  A gedit window should pop up on your screen, allowing you to save, open, etc. files on the remote filesystem. 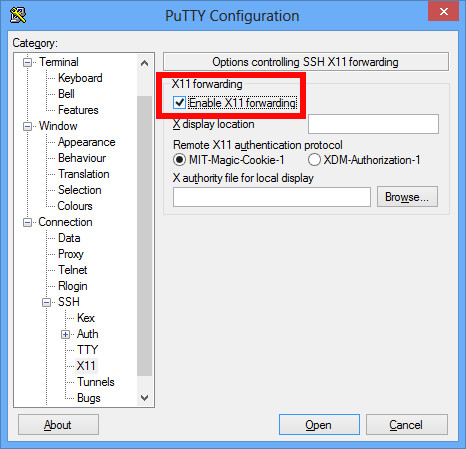 On Linux or Mac, open up a terminal and type:

The -X tells it to forward X11 traffic, and the same thing should work (type gedit, etc.) and you’ll see the remote program is opened on your local screen.

If you type “echo $DISPLAY” on your SSH screen, you’ll see something like localhost:10.0.  The remote screen knows how to get back to you through screen 10, which is automatically set by adding the X11 forwarding option in your SSH client.

Now lets take one step forward and enable X11 without SSH forwarding.  In your /etc/lightdm/lightdm.conf file, simply add to the end of it “xserver-allow-tcp=true”.

As you can see, port 6000 is now open (FYI – it used to be in the GUI with a checkbox that said Deny TCP connections to Xserver, but I guess they took it out).

$ xhost +
access control disabled, clients can connect from any host

Now just to make sure it works, connect from here to another Linux machine (through SSH, telnet, or whatever).  Again, assuming your local IP is 192.168.1.5, you’ll type the following in your session to the remote machine:

The remote machine’s gedit program should appear on your local box.  It is doing that through the port 6000 that you just opened up.

Now that we know we have a vulnerable system, lets hack it.

There are several scanners to tell if it is open authentication.  Nmap has a good x11-access script:

Nessus also has a plugin called X11 Server Unauthorized Access that will tell you.

First note: in order to run some of these apps, you may need to install x11-apps and/or xutils-dev packages.

Once you find these systems, hacking them still isn’t easy.  You can’t just type xterm to open a shell because it will open your shell on the vulnerable system’s screen.  Not ideal.  So instead, you pull screen captures and send keystrokes.

Open up the screen shot, and it should be the remote system.  If the screen saver appears to be on, you can deactivate it with :

Take another screen shot to verify.  Now we are going to create a netcat listener for our remote machine to connect to:

Then open another window and type:

Be careful with this screen.  Anything you do here will be sent straight to the other vulnerable system.  What we want to do is use xdotool to send keystrokes to the vulnerable system, opening up xterm and piping a bash session back to you with netcat.

You should now be able to type commands normally to the vulnerable system from your netcat terminal on your hacking system.  Don’t forget to kill the terminal window you opened in order to stay stealthy.  You can do that by first grabbing its handle with xwininfo and then killing it with xkill:

Then you can re-activate the screen saver with:

Instead of using netcat, you can preconfigure a metasploit payload and download it with wget or something along those lines.  Then look for SSH keys (or generate your own) or some easier way to login afterwards.  A few other commands to look up include xsetroot and xmodmap.  There are also utilities for listening to keystrokes over that port as well.